Major road projects are getting underway this week, with some downtown detours expected to last until September. 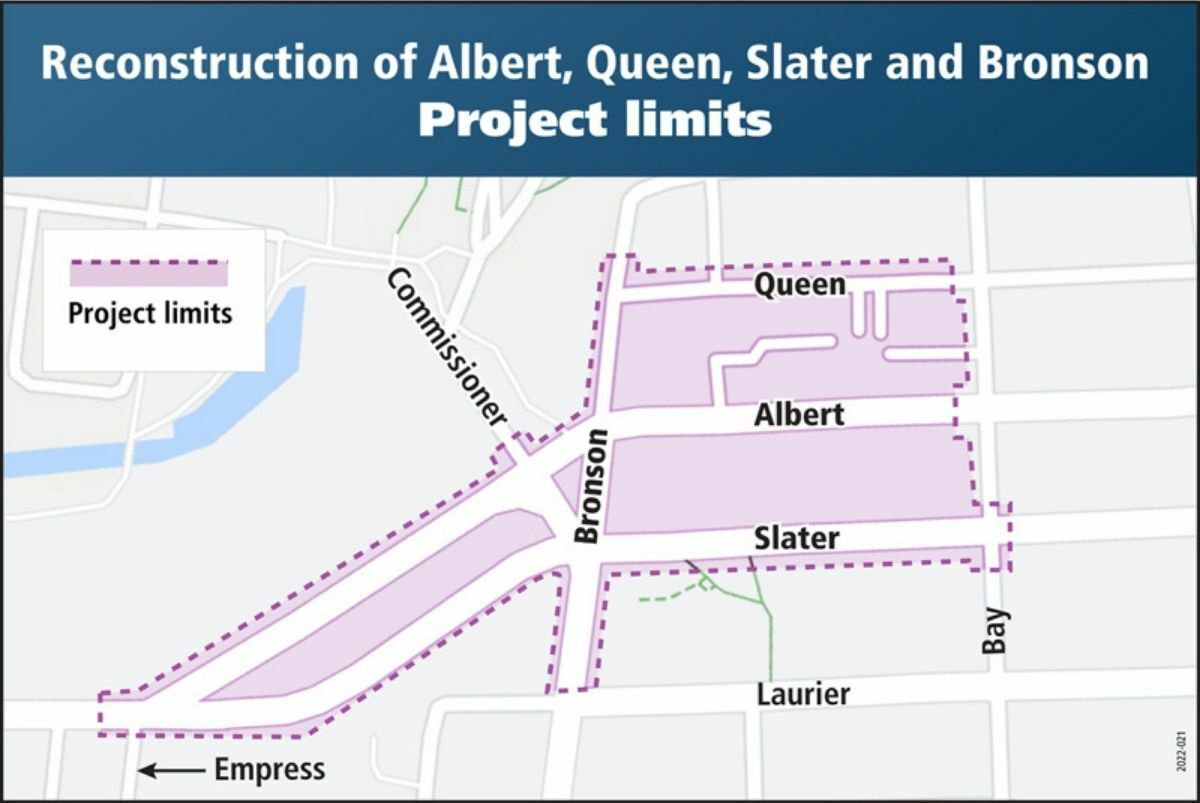 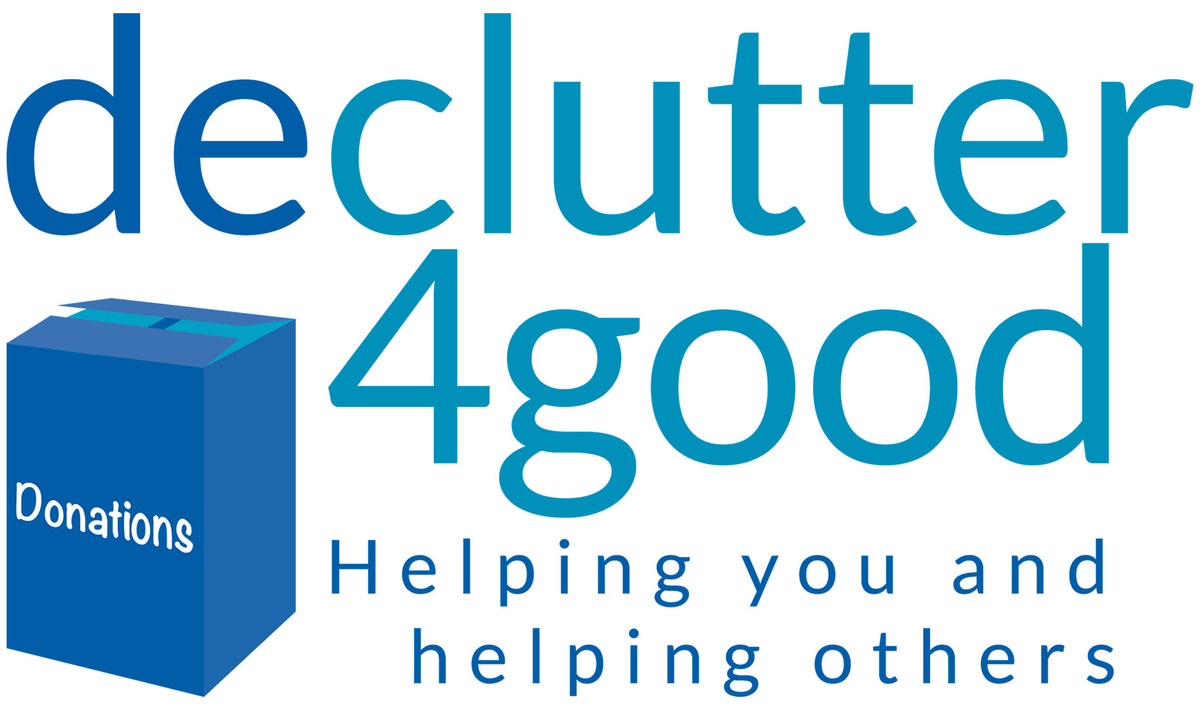 It’s not quite consistent yet, but there was a brief spell this weekend where the weather was nice for a solid walk. The dog had her first graze of the year, finding a few shoots of green grass beside a big rock, so she’s quite happy. And, good news, the trails in the city seem to be clear of snow. It’s great out if you can find a window of sunshine, I highly recommend it—especially with a lot of rain coming later this week.

Thank you to all the new members, who have signed up for the weekly Insider newsletter. Last week’s was free, but this Thursday will be members-only. If you’ve been thinking of signing up, you can do that here.

With that, let’s get to your Monday newsletter.

’Tis The Season For Construction

Courtesy the City of Ottawa

It begins: Spring is here, and that means construction season is, too. This week a major overhaul begins at Queen, Albert and Slater Streets around where they meet Bronson Avenue, CTV reports.

The area is getting a major infrastructure upgrade underground to the sewers and water mains, according to the city. But more visible will be the addition of bike lanes, widened sidewalks and improved intersections to make them safer. Bus stops will be improved, and trees will also be added.

It will also update Albert where the new Ādisōke building — made up of the new Library and Archives Canada and Ottawa Central Library — will go on the eastern end of LeBreton Flats, adding on-street parking bays and other improvements.

Montreal Road: On April 24, major construction will begin again on Montreal Road between Vanier Parkway and St. Laurent. The city is finishing a four-year project to overhaul the area’s infrastructure and improve the road, according to the city.

Detours: The final phase of the Montreal Road improvements will see only one lane heading west until about mid-September. Eastbound traffic will be directed along McArthur Boulevard. Side streets all along the stretch under construction will have no access to Montreal Road for much of the construction season. Pedestrian access to businesses will be maintained.

North River Road is also being improved north of Montreal Road, which will include traffic calming measures like speed humps and the addition of pedestrian crossings. 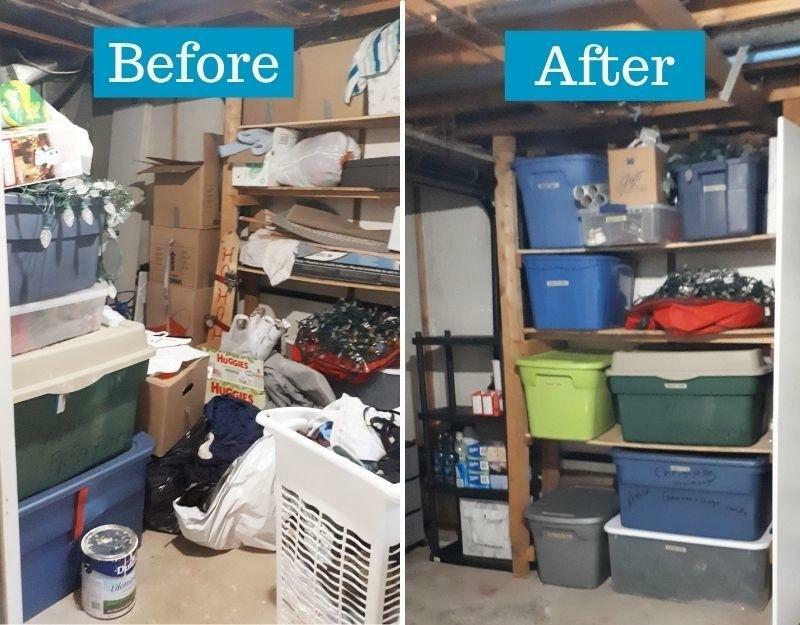 More than ever our homes need to be our sanctuaries. If your home is making you feel stressed and overwhelmed, Declutter4Good Organizing & Decluttering can help. In a matter of hours, they can transform a room and have it functional and calm again.

Organizing & Decluttering allows you to take control of your life again — hit your reset button with a fresh start. No more piles, no more clutter and less wasted time, energy and money. Check out these before and after photos to see the transformations they do every day!

And Declutter4Good takes those items you are ready to let go of and finds local charities looking for those items. A win-win-win: you get space and calm, your donated items have a second life with someone who needs them and those items are diverted from landfills. 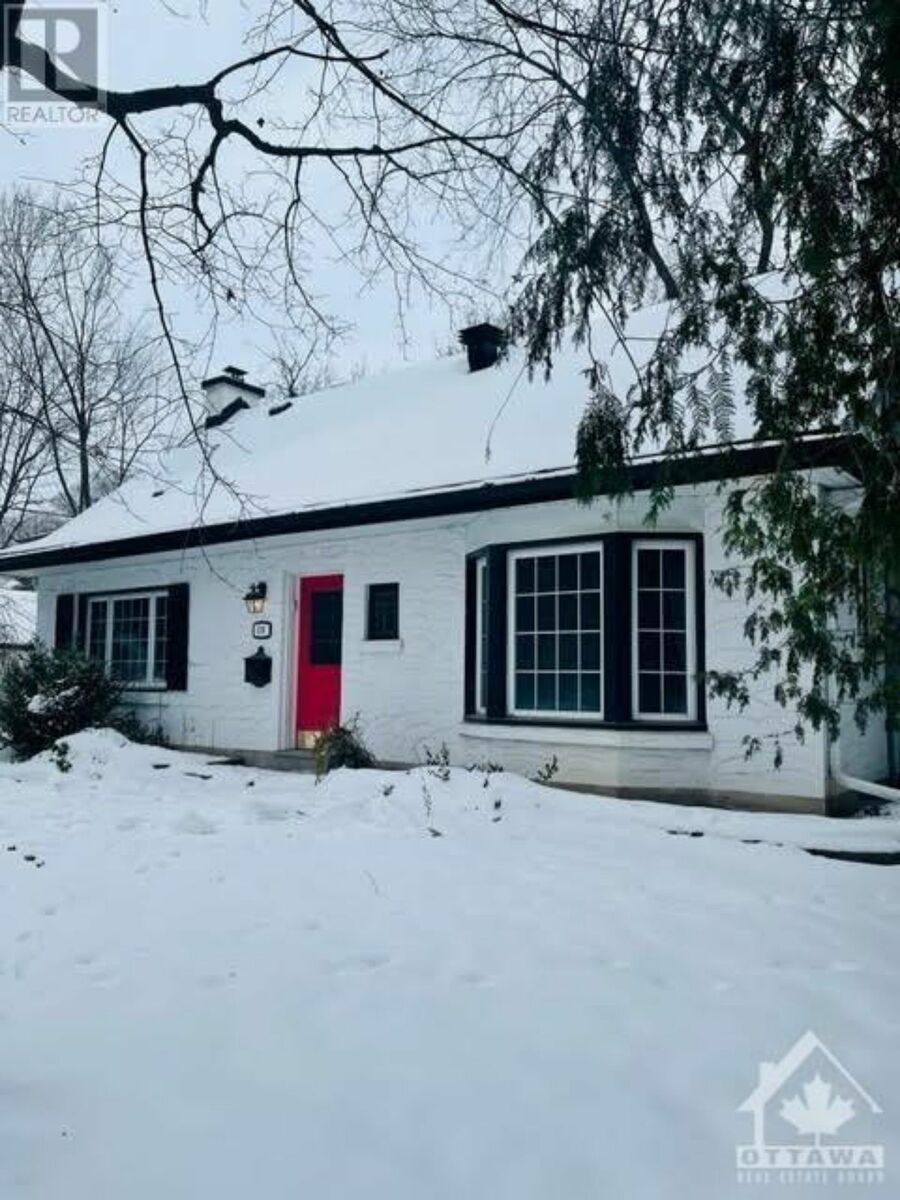 For the land value: An 80-year-old Westboro home isn’t as valuable as the land underneath it. The lot has recently been re-zoned to allow for two eight-unit buildings in the place of the single-family home, CTV reports. The $1.649-million price tag is similar to another property on nearby Roosevelt Avenue.

Hard to sell as-is: One of the owners of the property, a local real estate agent, told CTV the four-bedroom house had been difficult to rent or sell at its current price point. Even those looking to buy the land and put up a pair of single houses found it wasn’t worth it, the agent said.

Market hot elsewhere: In New Edinburgh, a home sold for $3.128 million — more than $800,000 above the asking price which might be a record, according to CTV. The house overlooks Rideau Hall and has an octagonal living room and bedroom, a two-storey entryway, and an elevator with access to all three levels.

Find your dream job with these new positions:

Masking in schools: An Ottawa-Carleton District School Board trustee will introduce a motion to bring back mandatory masking at a meeting Tuesday evening, the Ottawa Citizen reports. The news comes after Dr. Vera Etches, the city’s chief doctor, said earlier to the Citizen she would support any school board voting to return masks to schools. (Etches has the ability to require masks in schools, and elsewhere, using her own powers.)

Union wants to delay return to offices: One of the unions representing city workers has asked for more safety measures and to put off the return to in-office work, according to CBC. Because of the rise in cases, the union says it doesn’t want to contribute to spreading COVID or endanger its members.

High demand for fourth doses: Wabano Centre for Aboriginal Health said its schedule is filling up with people looking to get their fourth dose of the COVID vaccine, according to CityNews. The centre is taking advance bookings for vaccinations because of high demand.

Few rapid tests made it to hot spots: Only about one-fifth of the rapid tests handed out by the provincial government in the first 10 months of the free program went to hot spots, according to the Toronto Star. Instead, major employers got the bulk of the tests in a free-for-all scramble. More rapid tests went to private schools than went to paramedics, daycares, shelters, and jails combined. At the same time, the government said it wasn’t necessary to run testing programs in the public system. 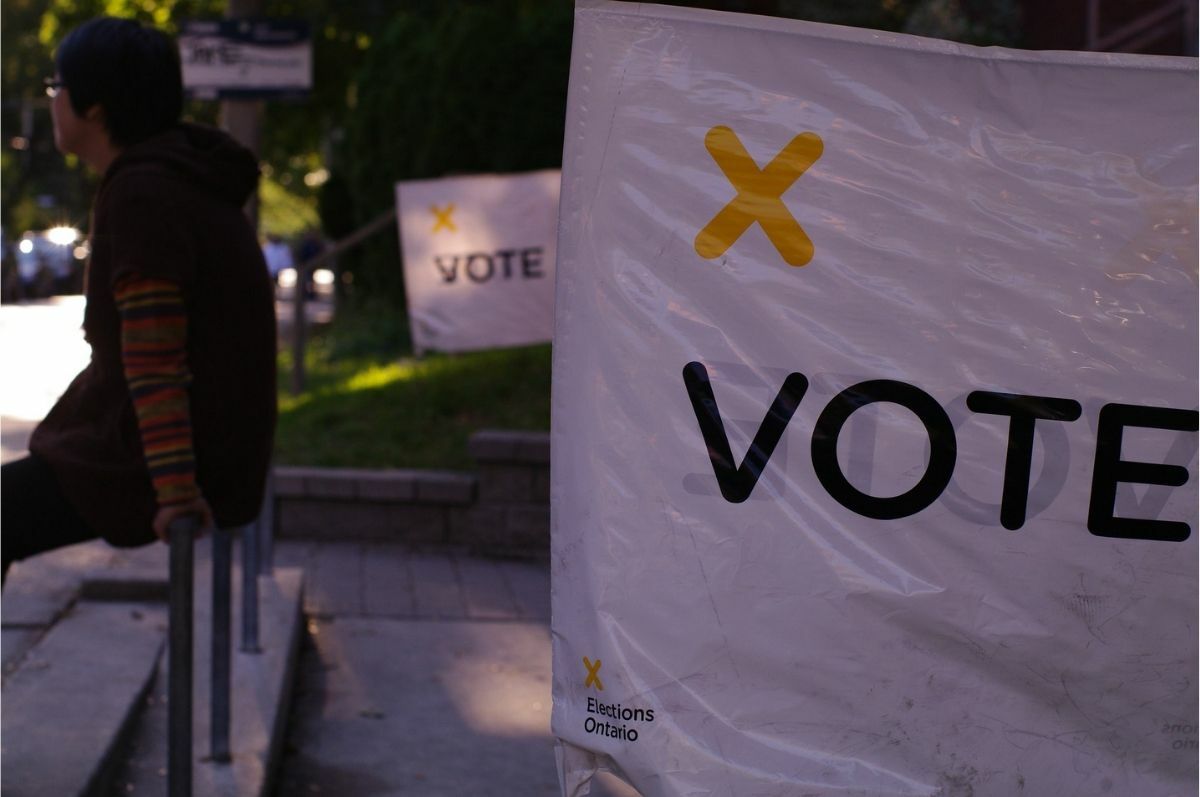 A provincial election is expected June 2. Here’s a look at some of the headlines ahead of the spring vote.

Expanded voting: The June provincial election will have 10 days of advance voting and expanded mail-in voting because of the pandemic. Voting times and locations will vary by riding, to allow for flexibility in different communities, particularly rural ones. A new online process will be open from May 4 to May 27 to apply for a mail-in ballot. [CBC]

PCs, NDP launch election ads: The election has yet to officially begin, but both the Progressive Conservatives and New Democrats have launched election ads. Expect to start being bombarded with political advertising in the lead-up to election day on TV, radio, and now on podcasts. The NDP said this year they have the resources to run ad campaigns on par with the Liberals and PCs. [CTV]

Queensway Carelton ER busier, more violent: More patients are showing up at the west end hospital in an ambulance, causing higher wait times. They are also seeing patients with more serious health issues. The ER is also having to call in security for patients that are violent or threatening, at a rate almost double from the year before. [CityNews]

Atletico Ottawa win opener: Ottawa’s professional soccer team started off their season with a win. The team wore special yellow and blue kits which will be auctioned off to raise money for humanitarian aid to Ukraine. Tickets were pay-what-you-can, with proceeds also going to the war-torn country. [CTV]

Relief after minor hockey suspensions: The mother of a minor hockey player who was the target of anti-black racism said she was relieved after six of his teammates were suspended for “deplorable incidents that occurred on and off the ice.” Two players on L'Intrépide de Gatineau faced racial abuse. [CBC]

Residents skeptical of new Moore Farm operators: The historic urban Moore Farm is Gatineau has new tenants, and residents are worried the farm-to-table restaurant is going to limit access to the trails and other grounds at the heritage site. The Restaurant La Commune and the NCC said they are committed to preserving access for the community and maintaining urban agriculture at the farm. [CBC] 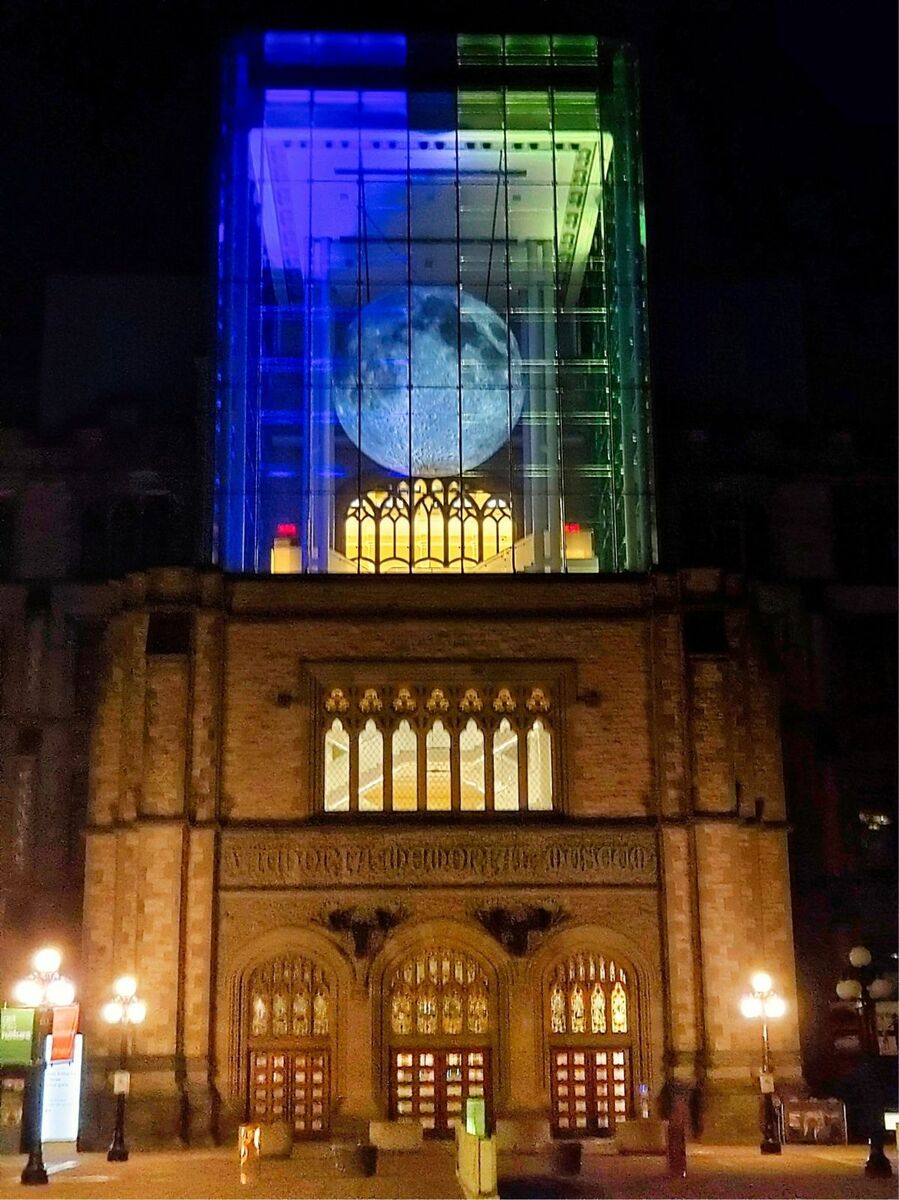 Reader Alan Bacon sends us this photo of the Museum of Nature at night, with its lantern lit up in the colours of Ukraine.

Do you have a great shot of the city from your walk around town? Send it in! We’re always looking to run great photos of Ottawa.