The NCC announced several plans for its properties, but it’s saving news about what’s going to happen to LeBreton Flats until June.

Hope everyone enjoyed the first edition of the Insider yesterday. I know I did, we ordered a pair of sandwiches from Roberto’s Corner. I’ve been buying from there for a while but reading about it again, it was all I could think about all day. That bread, let me tell you. Would highly recommend you give some of Ralf’s sandwich suggestions a try.

And don’t forget, next week’s Insider will be members only. So if you haven’t signed up already, there’s no time like the present to get a membership.

With that, let’s see what’s going on in the city.

Rainfall Warning: Rainfall amounts of 20 to 30 mm into Friday morning may lead to localized flooding in low-lying areas.

A New LeBreton Arena? No Announcement Until June

No news, for now: The NCC won’t announce the centrepiece of its new LeBreton development until June. There was speculation a new Senators arena would be announced. The NCC instead only said it received multiple pitches for major attractions at the site, according to CBC.

In June they’ll announce the winning proposal after signing an agreement with the developers. There won’t be any further public consultation on what goes on the spot, as the public was consulted in 2019 when the NCC took the first crack at developing the site.

What else was announced, according to the Ottawa Citizen:

The Housing Measures In The Federal Budget

Cooling a red-hot market: The federal government is trying a series of things to make the price of housing more affordable. A ban on foreign buyers is one of the big policies. So is an $800-million fund to speed up approvals at the municipal level across the country, according to the Ottawa Citizen.

But with soaring housing prices such a widespread and complex program, there is much more in hopes of making housing more affordable.

The Ottawa Citizen breaks down the key areas:

Money for approvals: It’s not clear the fund to speed up approvals will work. Coun. Scott Moffatt, vice-chair of the planning committee, told the Citizen he wasn’t sure money was the issue in getting permits approved. “You cannot rush building code compliance as a means to achieve more affordable housing,” he told the paper.

COVID On The Rampage, No One Taking Action

The reason: The lack of masks. The head of the Ontario Science Table told the Canadian Press “We are creating a tidal wave” because the mask mandate was dropped. Province-wide, there may be as many as 100,000 daily cases based on the level of the wastewater signal, CityNews reports.

Please won’t someone do something: Dr. Vera Etches, Ottawa’s chief medical officer, is doing lots of encouraging. She encouraged employers to encourage masking, according to CTV. She encouraged the people of Ottawa to wear masks when they’re out. She said everyone should limit their close contacts because of the spread of COVID, also via CTV. But she has not issued any orders to make masking mandatory or limit capacity, despite having those powers.

Etches said there is much more COVID in the community, and going in enclosed spaces with lots of others makes catching the virus more likely.

Provincial update: At Queen’s Park, opposition leaders asked the government to bring back masking rules, CBC reports. These requests were not g heeded by Premier Doug Ford, whose spokesperson said the province’s chief doctor did not request the return of mandatory masking.

Fourth boosters available: If you’re over 60, you’re now able to book an appointment for a fourth dose of the COVID vaccine, CTV reports. You’re eligible for a second booster if it’s been at least five months from your third shot. You can book an appointment through the provincial portal.

$7.75M in convoy funds missing: Of the $24 million raised by the convoy protests, about $7.75 million is unaccounted for. The missing money is from GiveSendGo, the online fundraising platform that stepped in to facilitate convoy donations when GoFundMe suspended the original crowdfunder. Most of the GoFundMe money has since been returned to donors, it’s unclear how much, if any, GiveSendGo money has been refunded. [CBC]

Alexandra Bridge to be torn down: The 124-year-old bridge connecting Ottawa to Gatineau is set to be torn down. Built in 1898, it is showing concerning signs of decay, and cannot be repaired.

Bird flu worries farmers: The H5N1 bird flu was found in Ottawa, including a Canada Goose near Billings Bridge, that has local farmers worried. So far, the disease is confined to wild birds, but because this particular strain seems so virulent, there are worries it could pass into poultry stocks. Three farms, including one in Peterborough, have already been put in quarantine. [CBC]

Women fleeing Ukraine find safety in Ottawa: Two women from the Kharkiv region of Ukraine made their way to town after a weeks-long journey to escape the Russian invasion. It was a difficult journey as they brought their children out of the warzone. Both women left their husbands behind to fight in the war. “To watch kids say goodbye to their father is heartbreaking,” one said. [CTV]

Kinder Easter chocolates recalled: A series of Easter chocolates made by Kinder have been recalled over possible salmonella contamination. Easter-themed Kinder Surprises, mini-eggs, Schoko-Bons, and Egg Hunt kits are being recalled. The full list with details on the affected products and lot numbers can be found on the CFIA website. [CityNews] 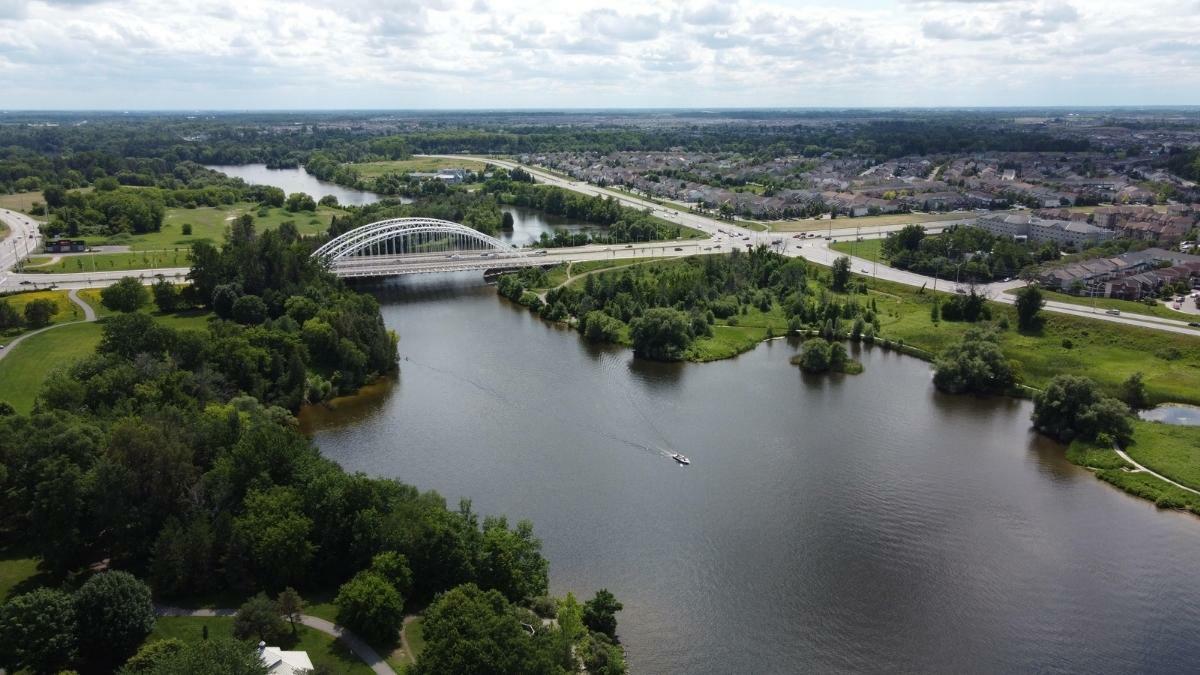 Here’s a bit of a throwback, to just last summer. A lovely view of the Vimy Memorial Bridge looking into Barrhaven, care of Reddit user Seawaysider. The dog really likes splashing in the rive underneath the bridge when we walk there when I visit my mother.

Have a photo you want to share with Lookout readers? Send it in! We’re always looking to publish reader photos in our newsletter.