An update on the latest storm news, and how Gatineau residents are preparing for potential flooding in the coming days 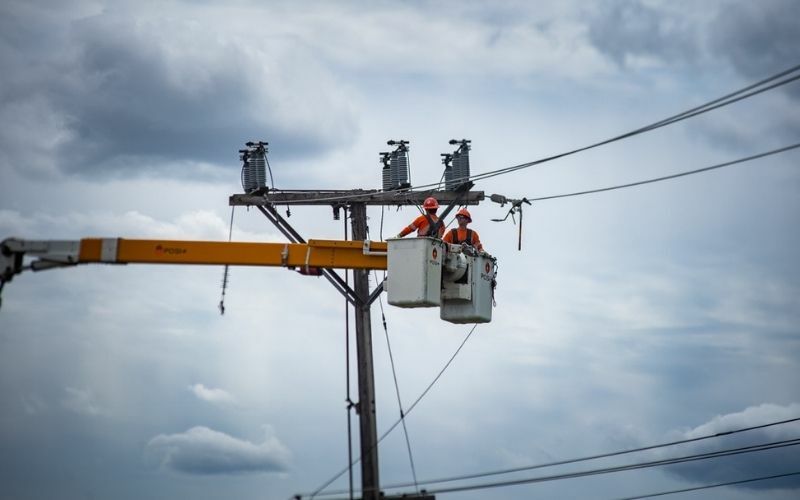 Geoff here. I’m the one who does a lot of our marketing. Some of you may know me as the guy who fixes the email problems around here. I tinker around the edges, never writing the newsletter but always reviewing and reading.

Well, that changes today — I’ll be subbing in for Robert in today’s email. You’ll see me a few more times in June as Robert takes a much-needed vacation. But fear not, he’ll be around to catch any of my spelling mistakes.

PS - Thanks to everyone who completed our provincial election survey! We’ve heard back from some parties and expect to have answers shared on Monday.

Status: As of yesterday 43,000 customers were without power, down from 180,000 who were impacted. Hydro CEO Bryce Conrad said they hope to have most of the power restored by tonight, but that’s weather dependent.

Unfortunately, not everyone may get their power back. The main arteries should return, but some streets and cul de sacs may take longer due to downed trees.

Be careful driving: As of yesterday afternoon, there were still 50 intersections without power, down from almost 200 after the storm, according to the Ottawa Citizen.

It’s not just families feeling the impact. Small businesses in the food industry impacted by the storm are facing massive losses. CTV reported that the co-owner of Around The Butcher Block Shop lost somewhere around $20,000 due to spoiled food.

Was this preventable? Not according to the Hydro CEO. In remarks yesterday he stressed, “No one builds infrastructure to withstand 190 km/h winds,” Conrad said.

Sometimes crisis brings out the best in people. CTV shared a story about Jan and Malcolm Zander who shared their generator’s electricity with four other neighbours.

Looking for assistance? See our guide about what city and other services are available to residents affected by continuing power outages. You can also find up-to-the-minute information on the city’s website and Twitter feed. 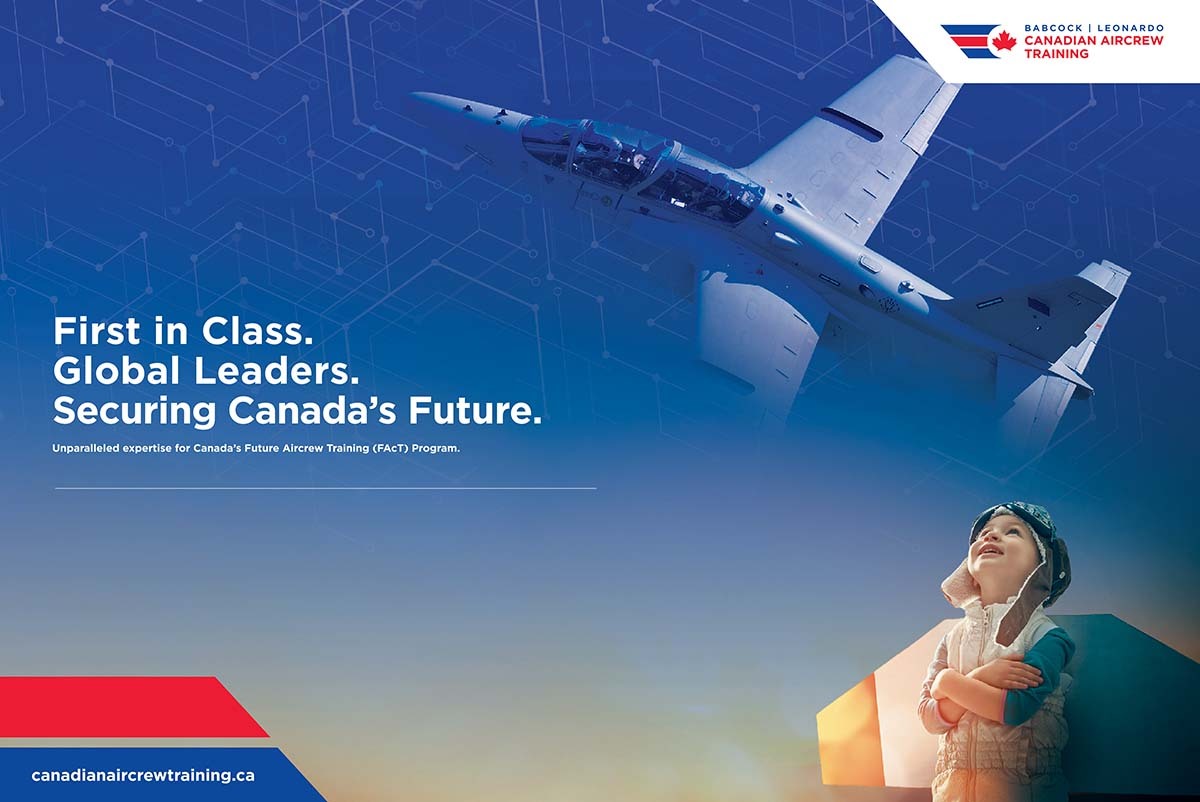 Canada deserves nothing short of world class – and that includes the training received by our military aircrew. With 70+ years of global aircrew training experience and 100+ years in military aviation, Babcock Leonardo Canadian Aircrew Training (BLCAT) is committed to equipping Canadian aircrew students with the world’s best training to ensure Canada’s air force excels at home and abroad.

This global experience – combined with best-in-class solutions, a proven track record in delivering military aviation programs, and existing ties to Canada’s military – will minimize transitional risk as they provide an innovative training solution and deliver optimal benefits to Canada’s economic and strategic goals.

BLCAT is ready to lead the development of a modern and scalable Canadian military training infrastructure, centred on supporting students and instructors and involving strategic local partners with roots across the country.

Situation: Gatineau’s mayor is calling for those in low-lying areas along the Gatineau River to prepare for flooding. According to CBC, Hydro Québec says the Baskatong Reservoir in Maiwaki, Que. is at capacity, with more water building up than expected. To prevent mechanical failure, the water needs to be released.

Yes, but: According to CTV, the city doesn’t believe Gatineau will be as affected as the city was by the 2019 flooding, since it’s only the Gatineau River releasing water, not the Ottawa as well.

According to the city, the areas at highest risk are:

To find info on where areas at moderate risk and where you can find sandbags, the City of Gatineau has a  flood website up-to-date information.

Is Ford ignoring Ottawa? A planned Thursday stop by PC Leader Doug Ford was cancelled and replaced by a Monday visit next week, three days before the election. Liberal Leader Steven Del Duca says Ford refuses to show up, but a Ford campaign insider told CBC they didn’t want to distract from the flood response. But as Joanne Chianello from the CBC points out, that didn’t stop Ford from visiting Uxbridge after the storm last Monday.

Policing not an election concern: Ottawa dealt with its fair share of recent policing issues. But according to the CBC, the issue of police reform is nowhere on the election map.

What National Geographic says about Ottawa 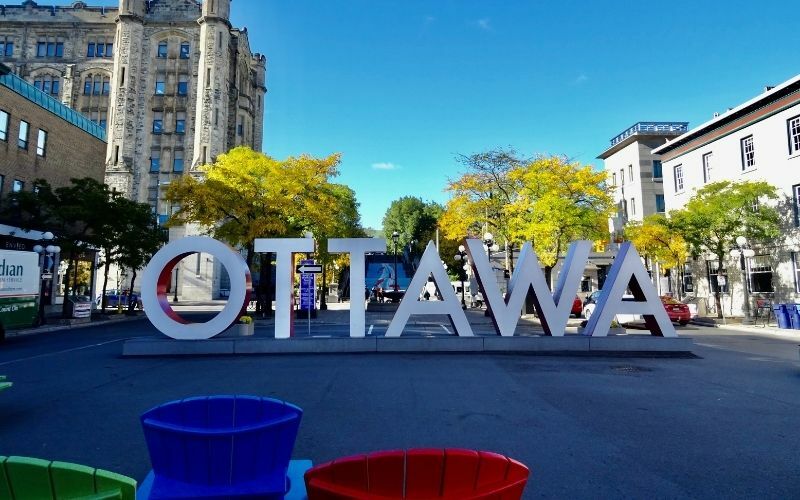 This city hasn’t always been done right by international media travel guides but a new one from National Geographic may actually have done a decent job of it.

As a publication that covers Ottawa food and restaurant scene with our Insider newsletter, our team reviewed the guide. Here’s what we found:

The good: A smattering of unique and local spots graced the article, including Black Squirrel Books, SuzyQ and Oat Couture Oatmeal Cafe.

Could be better: Do we need another beavertail recommendation? Really?

A surprise: Rather than focusing on the Market, they branched out into local neighbourhoods, including the Glebe, Westboro and Hintonburg.

This is one of the better Ottawa guides, but for the best restaurants, shops and activities, we recommend our Insider newsletter instead.

Highrise approved: Somerset and O’Connor will soon look different. The planning committee approved an 18-storey residential building, with 156 units and commercial ground-level space. It’ll include a red-brick base “inspired by the streetscape.”

Steve joins council race: Steve Desroches has thrown his hat into the Gloucester-South Nepean council race. The former councillor, who served from 2006 to 2014, as well as deputy mayor, joins one other registered candidate Em McLellan. The ward is currently represented by Carol Anne Meehan, who has yet to declare whether she will run for re-election.

Strike potentially over: A strike by the Carpenters District Council of Ontario, which saw 15,000 carpenters on the picket lines across the province since May 9, may soon be over. The Council announced a tentative agreement, with ratification votes happening today. [CBC]

Marriott moving in: The site at 395 Slater Street will soon feature a new Mariott hotel, with 230 rooms, 270 rental apartment units, a bar and meeting space. The project developer Rimap believes Ottawa is an underserved hotel market and is working on two other hotels. [OBJ]

Traffic update: Expect traffic delays in and around Lansdowne this weekend as the Ottawa Redblacks kick off their 2022 season and Tamarack Ottawa Race Weekend returns. See here for the full list of affected streets.

Sloly to speak: Former police chief Peter Sloly, who resigned after heavy criticism of the forces’ handling of the convoy occupation, will speak at the parliamentary committee next Thursday about expanding security in the parliamentary precinct. [CTV] 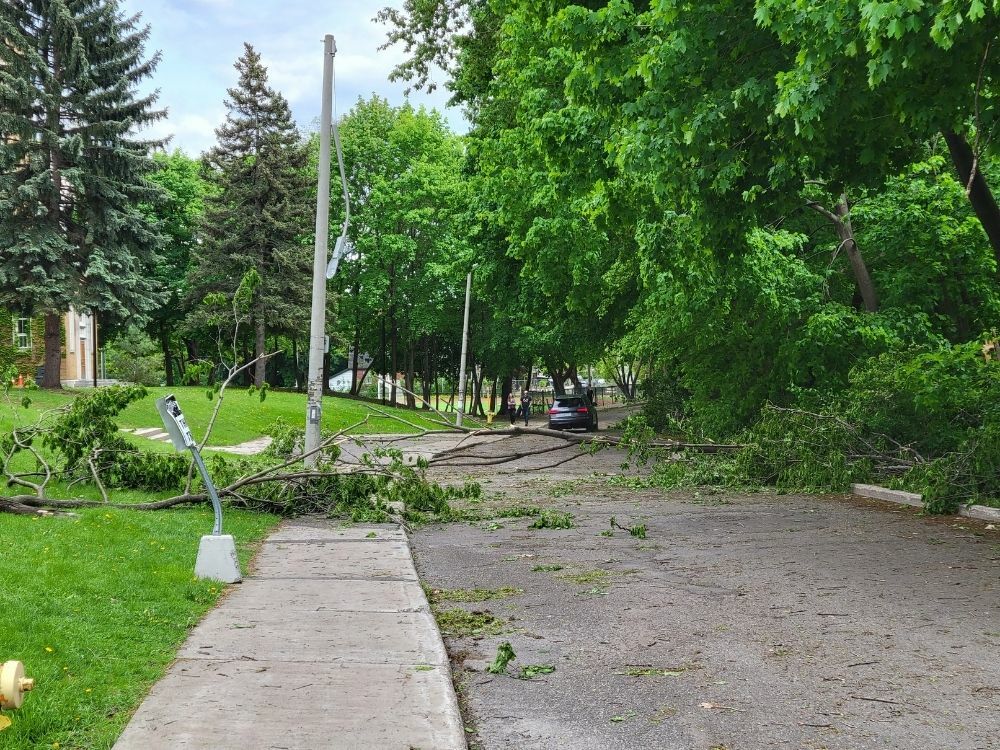 Thanks to Allison for sharing this photo of storm damage near Old Ottawa East.