Troubling signs the coronavirus may be on the rise in the city, plus the biggest migration to Gatineau from Ottawa in 30 years thanks to the pandemic 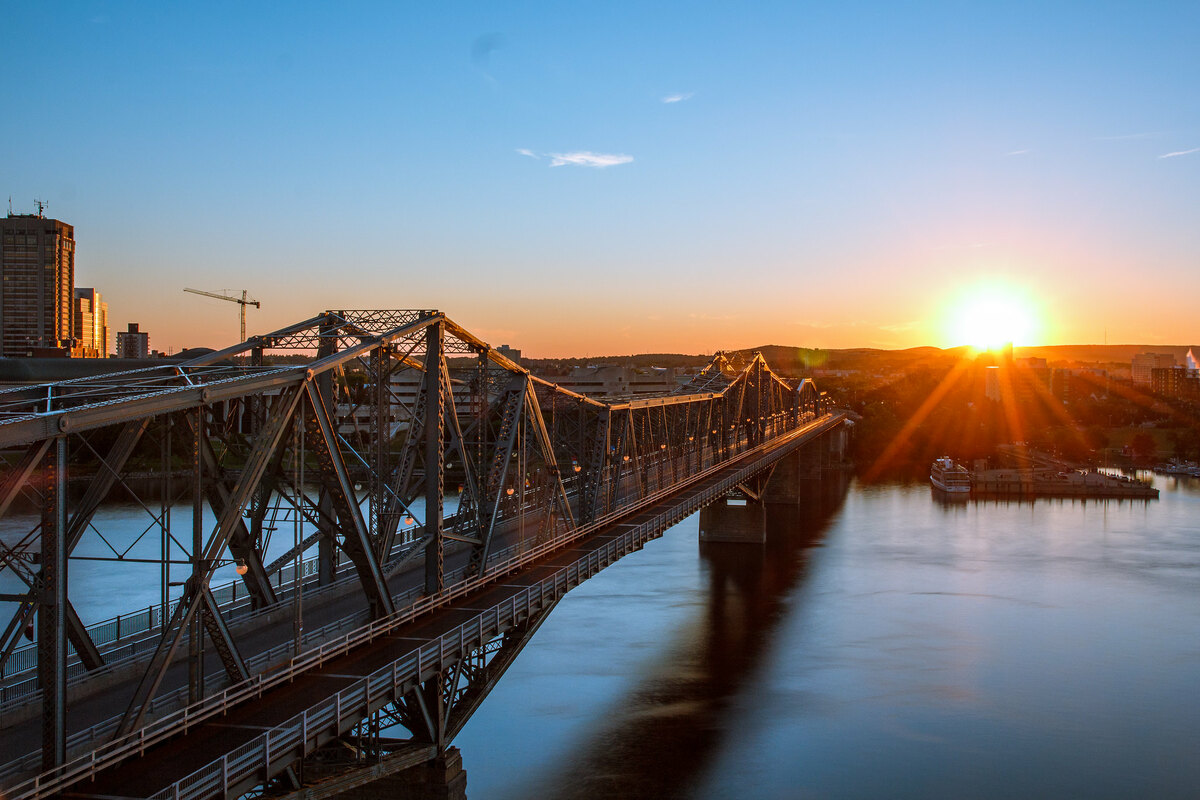 I don’t know if you’ve noticed, but the roads in this town are not great. Especially now the spring thaw has begun and the potholes are blooming. But are they Ontario’s worst? Last year, three Ottawa roads made Ontario’s worst, the most of any city in the province!

With your help, we can (sadly) do it again. The CAA has opened voting for its annual worst roads survey. Vote early, vote often. (Kidding, you can only vote once.)

Speaking of surveys, thanks to the more than 1,400 of you who shared feedback for our food and events newsletter. We’ve got the results in this issue, and later this week we’ll announce the new newsletter.

Ah, right, the newsletter. Let’s go do that.

Wastewater signal rising: About two weeks ago, the city’s wastewater viral signal hit its lowest point since the emergence of the Omicron COVID variant. Ever since, even before the mask mandate ended Monday, it has risen, indicating COVID hospitalizations and cases could be set to rise, CTV reports.

Tough choices: The disappearance of mandatory masking makes for some difficult choices for families with an immunocompromised family member. One family with unvaccinated children under five, and a parent with only one lung, made the call to put their kids in online school for the foreseeable future, according to CBC.

Another family with older vaccinated children, one of whom is a stem-cell transplant and cancer survivor, decided to keep their kids in school while the COVID numbers are low, fearing the isolation might be too much.

It’s a difficult balance for families to make, as they’re forced to weigh the risks.

Exodus across the Ottawa: The pandemic caused the highest number of people moving from Ottawa across to Gatineau in three decades of a Canada Mortgage and Housing Corp. study. The Ottawa Citizen reports about 16,500 people left the province, and it seems that the huge pandemic price spikes in Ottawa housing pushed so many to move across the bridge.

Different rules for travellers: The mask mandate hasn’t ended for everyone. If you’ve returned from travel abroad, you need to wear a mask for two weeks after your return no matter what your vaccination status, CTV reports. This is also the rule for children, who if they’ve gone abroad must wear a mask in school for the same amount of time.

The 5G Innovation zone in the heart of Kanata’s technology park offers businesses the chance to test digital solutions to real-life challenges — from an ambulance medic using augmented reality glasses to stream live instructions from an ER doctor or firefighters harnessing data from 5G-connected drones to reduce the risks of seasonal wildfires.

By harnessing the power of 5G connectivity, communities will have access to digital innovations that can change our lives for the better. Learn how the right 5G policies can make it happen.

What Do Ottawa Readers Want? More Food And Events In Ottawa

The numbers: 1,400 of you shared your ideas for our Ottawa food and events newsletter.

What do you want for restaurant coverage?

What you said about events: Share fun events throughout the city, including music concerts, food and wine, learning something new and art shows. Include a lot of options, but keep it short. Others mentioned theatre productions (great idea!).

No one likes paywalls: But many of you said you’d support a paid food and events newsletter if it meant keeping our public-interest journalism and daily newsletter accessible for all.

What’s next: Stay tuned for our big announcement Friday.

City driver turned in: The grader that killed a woman on her bike in Overbrook last week was driving behind her, before the driver overtook and ultimately turned and killed the cyclist, a witness told CBC Ottawa.

Later footage showed the bicycle underneath the grader. The woman was declared dead when she reached the hospital.

Changes wanted at intersection: The four-way stop at North River Road and Donald Street is one locals and activists want changed. The intersection is where the Adàwe Crossing goes over the Rideau. The roads are also often used by motorists skipping traffic on the Vanier Parkway, which runs parallel to North River. For her part, Perry wants the city to review its scheduling, wondering why the grader was out at a busy time of day on a side street.

The city says it is waiting for the outcome of the investigation, and for a formal study of the intersection before making any street changes.

It’s no secret — the housing marketing is red hot. But can you get the right price for your home? It’s more than just picking a random number.

One charged in attempted apartment arson: A 21-year-old man was charged with attempted arson and other charges for allegedly trying to set a downtown building on fire. The man is one of two who were shown on video allegedly lighting fire starters in the lobby of an apartment building after taping the front door shut. Police are still looking to identify the second suspect. They say there is no link to the convoy protests going on at the time. [CBC]

City supports nuclear waste at Chalk River: The city says it supports the construction of a low-level nuclear waste storage area from the Chalk River nuclear plant and research centre. The waste would come from older buildings at the site that need to be torn down. The city has 10 recommendations including radiation monitoring in the Ottawa River, a weather shield for the site, and ensuring the materials are treated to prevent chemical leaching into the surrounding area. The city also opposes shipping nuclear waste in from other sites. [CBC]

Gatineau’s Hexo posts big loss: The cannabis firm Hexo posted a net loss of $690 million in the latest quarter. It’s in the middle of a turnaround plan and expects to start seeing real results in the spring when it launches new products. [The Canadian Press]

Double the limit in rush hour: Police impounded and suspended the licence of a driver caught doing more than 120 km/h in the bus lane on Heron Road yesterday morning. The speed limit in the area is 60 km/h. The driver’s licence was suspended for 30 days, and the car impounded for two weeks. [CTV] 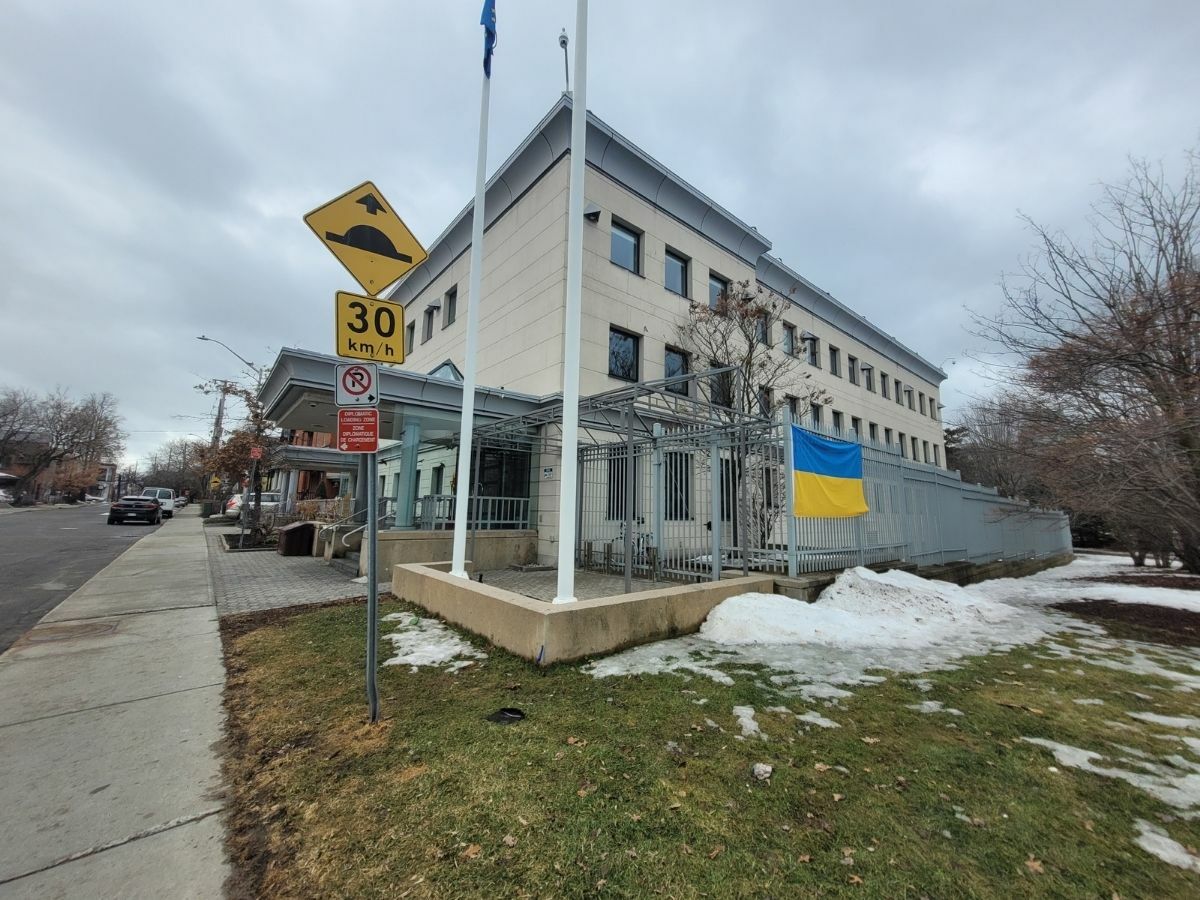 The German embassy is showing its support for the besieged people of Ukraine. Reader Ron Dennis sent us this photo of the diplomatic outpost on The Driveway.

Have a shot you want to share with Lookout readers? Send it in! We love to run photos taken by the community.